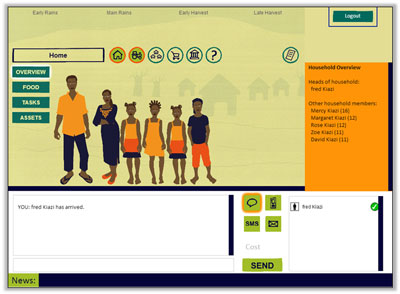 African Farmer is a free, open source game that simulates the complex decisions and uncertainties faced by small-scale farmers living in Sub-Saharan Africa.

Your challenge is to manage a farming household in a small village. You need to make decisions on what crops to grow, when to plant them and respond to crop pests and changeable weather. You must manage labour and provide your family with a nutritious diet or they may become ill and be unable to work.

The game is available in two versions: a single player game and a multiplayer game.

Who developed the game?

The single player game is developed by James Jackson.

Video: John Thompson explains the background to the game

Video: Jim Jackson explains how the game was made and how it works

Both versions of the game are free to download and any required software is also freely available.

Future Agricultures Consortium
Research, analysis and comment on the politics of agriculture in Sub-Saharan Africa and beyond.